Several communities in Western Sydney are continuing their battle to stop major waste company Bingo Industries blanketing their suburbs in awful odours. While the issue gains occasional attention on commercial radio or TV, there’s a lack of independent local journalism to explain and investigate these issues. This is why I’m continuing to follow this issue on my blog. You can read my whole series here. This situation raises serious questions about the adequacy of environmental regulation in NSW and a lack of consequences for big companies that breach environmental law. At this stage, there is a stronger case for closing Bingo down than expanding its operations as the company with the support of the NSW government wants to do.

On Monday, Sydney enjoyed a day of sunshine. These have been few and far between over the last four months. Unfortunately, some Sydney residents were forced to stay indoors because on leaving their homes, they were overwhelmed by disgusting hydrogen sulphide odours wafting out of Bingo Industries landfill at Eastern Creek.

As one frustrated resident wrote on a community Facebook page:

Really it’s NOT FAIR AT ALL on a beautiful day like today that I’m not able to sit outside in my beautiful backyard to enjoy a cup of coffee. The smell is disgusting now.

It can be even worse if odour gets trapped indoors. The previous night another resident told me that she couldn’t sleep because the odour invaded the house.

If this was just a one-off occasion, it might not be too significant. But in fact, odours have damaged the quality of life and health of residents in the suburbs around Eastern Creek not just for the last four weeks but for months last year and for weeks in 2020. These suburbs include Minchinbury, Erskine Park and Rooty Hill.There are also complaints about noise, unexplained fires and asbestos.

The story is an EXPLAINER which sets out the guts of the NSW Environmental Protection Authority’s ( EPA) Prevention notice that was sent to Bingo last week. Firstly, some background.

The EPA acknowledges that Bingo Industries has repeatedly failed to comply with its licence. According to NSW environmental law, it’s an offence to release odours from a licensed waste facility. It’s also a specific condition of the landfill licence, which was granted by the EPA in 2012, that its operators not allow odours to escape beyond its boundaries. Bingo Industries has failed to meet this condition on hundreds of occasions but have never been prosecuted by the EPA. In 2021, they did finally require Bingo Industries to change some of the ways in which the landfill is managed and install a gas system to burn the gases that should never have been coming out of the landfill. A year, later these measures have failed.

The company blamed last year’s odours on a one-in-a-100 year rainfall event. A year later, the rain is back again, an occurrence that is predicted to increase as a result of climate change. But the odours had been there before and in any case, water required organic matter to produce Hydrogen Sulphide and this landfill is only licensed to accept non-putrescible waste which is not organic.

Residents began experiencing serious odours in early March. On March 15, I rang Bingo spokesperson Chris Gordon who told me that he had made three calls to Bingo staff at Eastern Park over the evening and no one had smelled any odours. In clarifying, he later agreed that the monitors did show some exceedances but still understated the results. 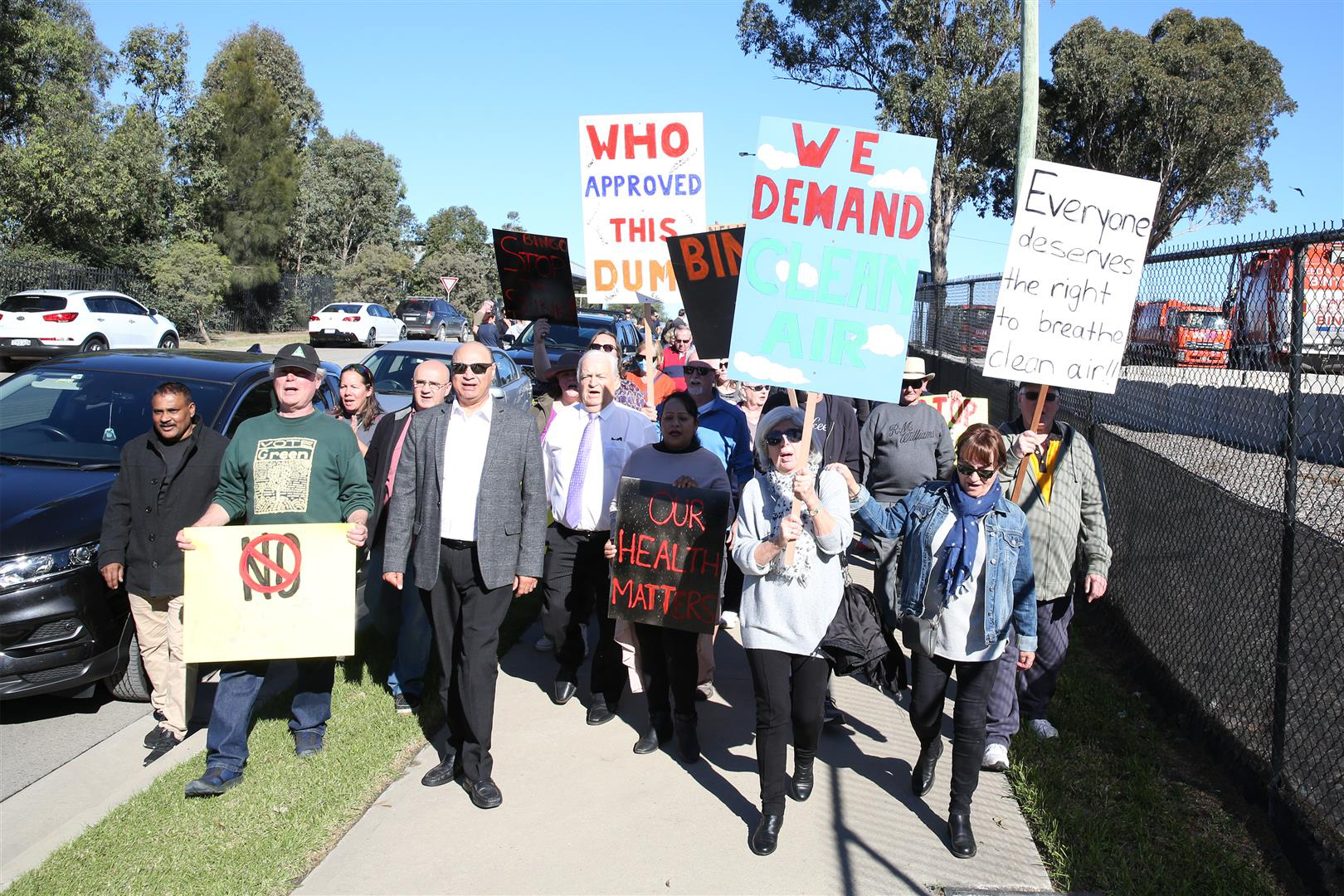 It’s odd that Chris Gordon didn’t initially acknowledge the exceedances because one of the measures that the EPA took last year was to install 7 monitors along the boundaries of the site and in Minchinbury. Surely the first thing staff would do as soon as the first complaints came in would be to check the monitoring results. If they did so, they would’ve noticed that there were exceedances from at least March 7. We now know that the leachate pumping system that was supposed to drain off noxious gases was out of action from March 2 and two of the temporary gas flares installed last year had also gone down. If Bingo executives were indeed unaware of the issues in mid March, this raises serious questions of Bingo’s competence to manage the landfill.

The EPA issued a Prevention Notice on April 1, 2022. You can read the full text here.

Under Section 96(2) of the Prevention of Environmental Operations Act , the EPA has the power to direct a licensee to take actions within a set time period to ensure that operations are conducted in an environmentally satisfactory manner. These directions are contained in what is known as a ‘Prevention Notice’. It is clear that the EPA has been negotiating the terms of a notice with Bingo over recent weeks while residents wait for answers to their complaints.

The Notice begins by stating that the EPA ‘reasonably suspects’ that the landfill is not being operated in an environmentally ‘unsatisfactory manner’.

The next section of the notice provides a background to the EPA actions.

Between 14 and 29 March 2022, the EPA received over 60 reports of odour described as hydrogen sulphide, rotten egg, sewer and/or landfill gas from residents and workplaces in Minchinbury and surrounds. ( Author: There have been complaints before and after those dates).

The notice describes how EPA officers have undertaken four odour surveys in Minchinbury and around the Bingo site between 16 March 2022 and 27 March 2022.

The notice then sets out many Hydrogen Sulphide exceedances that were identified on various dates both around the landfill, in various streets in Minchinbury and on the M4 motorway. It concludes, “Between 12 March 2022 and 28 March 2022, the EPA hydrogen sulphide monitors have shown significant numbers of hydrogen sulphide detections in monitors located within the Minchinbury community and around the Premises.”

The EPA officers also conducted an inspection at the landfill premises on March 22, which was at least 2 weeks after the fresh lot of complaints. They detected “very strong hydrogen sulphide and landfill gas odours at the location of two of the gas flares on the site and found that the leachate riser, ( part of the system that is supposed to remove noxious gas) was not working. ( There have been continuing problems with the leachate riser at the site since at least 2018.)

Having carried out their inspection, the EPA officers found that the temporary gas system installed in 2021 had broken with three of five flares not working between 10 and 17 March 2022 due to water damage. The motor for leachate riser pump was also inundated with water during the heavy rainfall events, which meant leachate could not be pumped to the treatment plant from 2 March 2022 until 22 March 2022 when it was fixed.

No wonder smells were suffocating the residents!

The EPA Prevention Notice then sets out the actions that must be taken.

By no later than 5pm Tuesday 5 April 2022 the Licensee must submit an investigation and mitigation action report to the EPA. The Report must be written by an independent, suitably qualified and experienced expert and contain:

By 31 March, Bingo must engage an independent, suitably qualified and experienced expert (Consultant 1) who must conduct landfill surface gas monitoring for methane and hydrogen sulphide on the landfill surface each business day. Monitoring results must be reported weekly to the EPA.

By 31 March 2022 the Licensee must engage a second independent, suitably qualified and experienced expert (Consultant 2) who must conduct an odour survey in the streets surrounding the Premises and in the Minchinbury area from Monday to Friday until April 22. The odour surveys must be undertaken at different times of the day, with a focus on the times when community reports of odours have been more frequent. Results of the odour surveys must be reported weekly to the EPA.

The contact person on the notice is Ruth Owler ruth.owler@epa.nsw.gov.au.

Why is the notice directed to Dial a Dump and not Bingo?

It’s rather confusing that the notice is directed to Dial a Dump Pty Ltd. This was the company owned by Ian Malouf that established the landfill. That company was taken over by Bingo Industries in 2018/19 and became a fully owned subsidiary of Bingo. Ian Malouf remained on the Bingo board and was a substantial shareholder until 2021 when Bingo itself was taken over by https://www.mirafunds.com/au/en/who-we-are.html. The whole operation is now owned by Macquarie, a very powerful global company which manages many infrastructure facilities. Ian Malouf is still on the Bingo Board.

Will the report be public?

The public should get to see the reports and the monitoring results. I have asked EPA if the report will be made a public and have been told that it “wouldn’t ordinarily be put on the public register”. But the community has a vital interest in the content of the report. What is the source of carbon in the landfill that is causing the the odours? What putrescible waste has Bingo received? Given that it was never licensed to receive putrescible waste in what circumstances did waste containing high levels of organic/carbon matter enter the landfill? Why hasn’t Bingo been required to monitor the landfill surface previously?

Who are the Independent experts and what qualifications and guarantees of independence do they have?

Surely an independent expert wouldn’t mind if their reports were made public? Will it be the same independent expert who advised on the temporary gas system last year which has spectacularly failed? Given that the experts are being paid by Bingo, how can the community be confident that they are independent?

Why it the NSW government supporting the expansion of an operation which has failed to protect the community from harmful impacts ?

In 2020, the NSW Planning Department supported Bingo in its application to increase the amount of landfill it can take. It continues to encourage Bingo to expand, despite strong community and Blacktown Council opposition.

I am continuing to report on the waste industry so if you know more please contact me at wendybacon1@gmail.com. I am a supporter of the Community Environmental Monitoring group. You can read my other reports on Bingo by following my Wading through Greenwashing series.