As floods recede and the huge and difficult clean-up continues , a massive waste problem is again emerging in NSW, including in Sydney’s Western suburbs.

Part of Western Sydney’s waste problem results from governments and waste companies promoting industrial developments close to growing residential suburbs. This existing and predictable planning problem is being worsened by increased extreme weather events including intense rain, floods, bushfires and storms that climate scientists have long predicted will only continue to increase.

As a result of the recent wet season and poor waste management, unpleasant odours are once again distressing residents in parts of Western Sydney. It is an offence in NSW to allow odours to escape from licensed waste facilities.

There is more than one company involved. Channel Nine has already reported that the NSW Environmental Protection Authority ( NSW EPA) have ordered both Suez and Global Renewables facilities to take steps to prevent strong odours escaping from their Eastern Park facilities into Minchinbury, Rooty Hill and other suburbs. These odours have been worrying residents since December. The photo below is reproduced from an EPA report of investigations in the Suez waste facility. 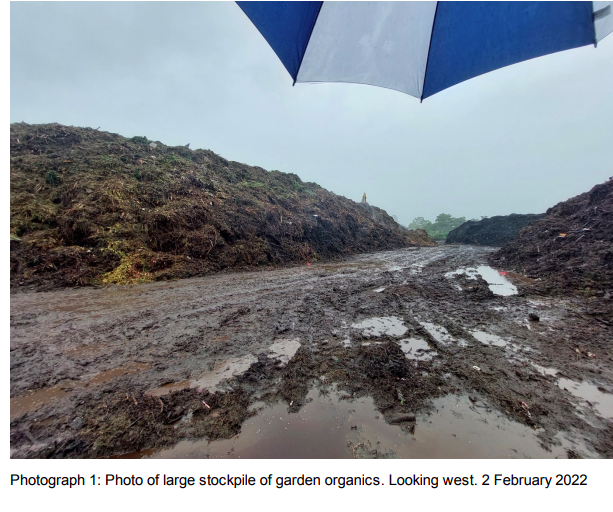 But even harder for residents to cope with are disgusting odours from the Bingo Industries that returned in early March.

Monitors near the Bingo site in Eastern Park have recorded scores of exceedances of hydrogen sulphide.

This waste problem may not seem so urgent to those confronting the trauma of losing their homes and witnessing mountains of debris along their streets after floods but it’s yet another underlying problem that will become worse as the impacts of climate change accelerate. It also raised questions about the competency of those running the facilities and the capacity of the NSW EPA to regulate the industry.

As I have revealed in earlier posts, the history of regulatory breaches at Bingo goes back a long way but in the last two years the impact on the community has become particularly severe. Minchinbury, Erskine Park, Rooty Hill and other suburbs have been dealing with hydrogen sulphide gas or ‘rotten egg’ gas from the massive Bingo landfill and recycling facility at Eastern Creek. Residents lodged many complaints in Autumn 2020 but the situation became even worse in late Summer and Autumn in 2021 when there were hundreds of complaints to the EPA. The suffocating odours kept people locked up inside in hot humid weather or awake at night. There were complaints of breathing difficulties, irritated eyes and even depression and anxiety when residents began to fear that they were stuck with the odours. Some families did not feel able to invite people to their homes.

For weeks, Bingo Industries denied the odours were coming from its site. Eventually, after a resident and Blacktown Council had identified Bingo as the source, the NSW Environmental Authority (EPA) confirmed the obvious truth.

Hydrogen sulphide is caused when rotting putrescible matter ( e.g. organic food waste in red bins) combines with water. Landfill sites that are licensed by the EPA to accept this type of waste need to be carefully managed including by installing gas systems to burn the gas. Bingo, which opened in 2012, has never been licensed to accept putrescible waste so it should not emit enough hydrogen sulphide to cause an odour problem. It is against the NSW Protection of Environment Operations Act for any company to allow odours to escape from a licensed waste site.

By late April 2021, the odours were overwhelming the community and shifted with the winds from suburb to suburb. With continuing pressure from the media, Blacktown Council and local Labor MPs, the EPA issued ‘Clean-up notices’ including a ban on the acceptance of flood waste that trucks had been delivering from flood damaged areas and limitations on the amount of landfill ground that could be used for dumping at any one time. It also stopped Bingo using an alternative cover rather than the EPA’s preferred option of ‘virgin soil’ over freshly dumped material. Bingo had simply gone ahead without approval.

Meanwhile the EPA stated publicly that it was investigating potential breaches of the law. Some residents then spent a lot of time documenting their experiences and being interviewed by the EPA. Despite residents and the EPA’s own investigators spending a large amount of time preparing what would seem to be an irrefutable case, no charges have yet been laid.On its website, the EPA states that it continues to investigate regulatory breaches.

Why hasn’t the EPA begun a prosecution?

We don’t know the answer to this question because they EPA does not deal with the community transparently.

It has also failed to explain to the public why a landfill that was not licensed to take putrescible waste emits so much hydrogen sulphide. Bingo blames the rain but water alone does not create hydrogen sulphide. Putrescible waste is “solid waste that contains organic matter capable of being decomposed by microorganisms and of such a character and proportion as to cause obnoxious odours.”

Neither Bingo or the NSW EPA have ever frankly discussed the causes of the problem with the community.

But despite the lack of regulatory action, the EPA was under pressure to stop the odours.

After its initial EPA clean-up requirements failed, the EPA ordered Bingo to install a temporary gas burning system which has been in place since July 2021. It also installed seven real time hydrogen sulphide monitors nearer the Bingo site boundaries and three in Minchinbury. There are none in any other nearby suburb. These show the concentration detected in each 10 minute air sample collected by the monitors. These monitors showed an improvement in release of hydrogen sulphide after the gas wells were installed. Residents were relieved but wondered what would happen when Autumn returned.

So you can imagine the dismay in Michinbury in early March this year when the now familiar ‘rotten egg’ odours returned. Complaints were laid with the EPA and Bingo but once again Bingo initially told residents they could find no evidence that they were responsible for the odours.

However the publicly available real time monitors around the boundary of Bingo told a different story. The evidence is limited because monitors that depend on batteries were flat for several crucial days in early March when the odours began. Despite this the monitors show exceedances of hydrogen sulphide gas in March and a few in earlier months.

This week, I asked Bingo a number of questions about the hydrogen sulphide odours.

In response, Bingo’s General Manager of Corporate development Chris Gordon sent me a statement that acknowledged:

…there have been a small number of temporary increases in odour for the period 10-15 March. However, for the three monitoring stations located in Minchinbury there has only been two instances where odour was detected at or above the odour detection threshold for 2022 to date, both of which were in March. For the period August 2021 to December 2021 there was only one case of odour detection above the detection threshold, in October 2021. This demonstrates the efficacy of our current landfill gas capture and treatment system.

My observations of the monitors suggests that this is an understatement.For example, see below a screenshot of the monitoring results at Honeycomb Drive near the boundary of the Bingo landfill. Although it is a little difficult to read and the monitor was not working on at least one day, there would appear to be at least 28 exceedances since March 1, 2022. Since the gas well and flares were installed at July, there have only been two months when there were no exceedances. This foul smelling air will blow towards different suburbs depending on the wind direction. The smells tend to be worse at night.

This screen shot below is from the monitor located somewhere in Farrington Street, Minchinbury. It shows exceedances that reflect the air at that particular spot. On a recent visit, Community Environment Monitoring could not find the monitor. I count at least 7 exceedances.

I count at least 7 exceedances. 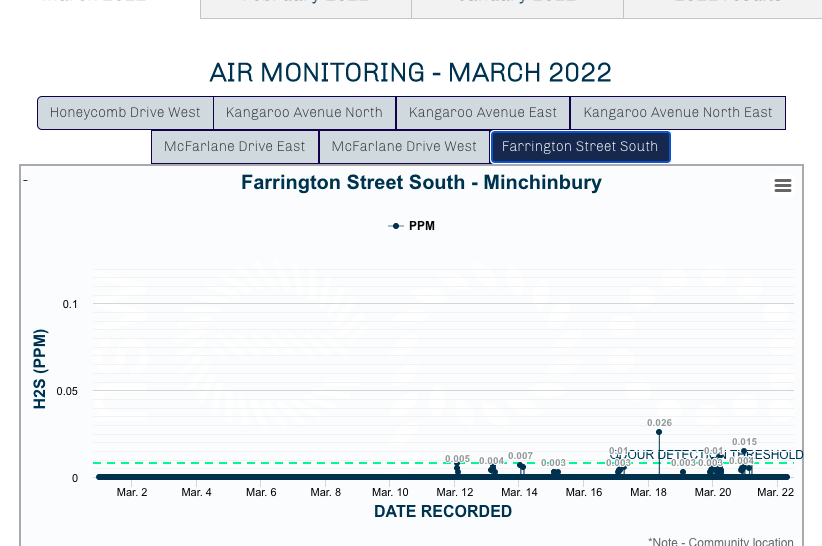 What has changed at the Bingo landfill?

For a start, there have been weeks of intense rainfall. However this alone should not cause problems because landfill licenses have lot of specific requirements about how water and leachate should be managed. A well managed landfill will not release odours. But an earlier 2019 showed that there were several problems in the way that water on the landfill had been managed.

Recently the NSW lifted its ban on Bingo taking flood waste. According to Bingo, the site had only accepted two truck loads of waste by last week. More is no doubt on the way but according to Bingo, it’s unlikely to be as much as the landfill received last year.

Due to other putrescible waste dumps being unavailable, the NSW EPA recently allowed Bingo’s operations at Eastern Creek and Auburn to accept putrescible waste under strict conditions. The waste had to be kept in a shed and for no more than 24 hours before it was transferred to Auburn on very big trucks. Bingo’s Gordon told me this week,

Bingo has now stopped accepting this waste “given some perception that this may be producing an odour in the community (even though we are confident it is not), we have voluntarily decided to advise the EPA that we will not use the Eastern Creek recycling facility for this purpose, and instead will only use our Auburn facility. Waste material is temporarily (less than 24 hours) stored inside our Auburn facility, where it is consolidated into larger trucks (walking floors) and transported to a putrescible landfill (currently Newcastle because the Sydney landfills are not available).

The Bingo gas pipe and flare system that is supposed to stop the gas emissions failed to work properly.

In response to my questions, Bingo sent this reply:

After it observed that the monitors were showing exceedances, BINGO “subsequently identified that three of our five temporary flares were not operating at full efficacy in recent days due to condensation/moisture from the recent heavy rain entering the gas collection system. We have had a team on site since Tuesday to rectify these issues and we expect two of the three flares that were not operating at full efficacy are now back on line. Two flares continued to operate efficiently, including one high capacity flare (with a capacity double the other flares). A sixth flare is expected to be operational by the end of March 2022. As you would be aware, the development application for the permanent flare system was recently approved by the Department of Planning and Environment. The installation of the permanent flare system is being progressed as quickly and possible and is expected to be completed later this year.”

Late last year, NSW Planning and Environment approved the installation of a permanent gas flare system. The community were given no opportunity to provide feedback or seek independent advice before approval was given. We can only hope that the permanent gas system which will be installed by July works.

We need waste facilities but they must be properly managed and not near where residents live whether that is in the cities or the regions. Community Environment Monitoring Research Director Charlie Pierce who has experience with landfill management said in response to these recent developments, “this is a continuing demonstration that Bingo is not fit to operate a waste management facility. There is no plausible reason for condensate ( moisture) to reduce flare efficacy in a well managed and monitored environment.”.

Wendy Bacon is a supporter of Community Environment Monitoring.

This is the 5th story in my series on https://www.wendybacon.com/investigations/wading-through-greenwashing

If you have more information on Bingo or other issues in the waste industry, you can contact me on Facebook messenger or at wendybacon1@gmail.com . If you are a journalist who would like to cover this story, I am happy to share my information with you. 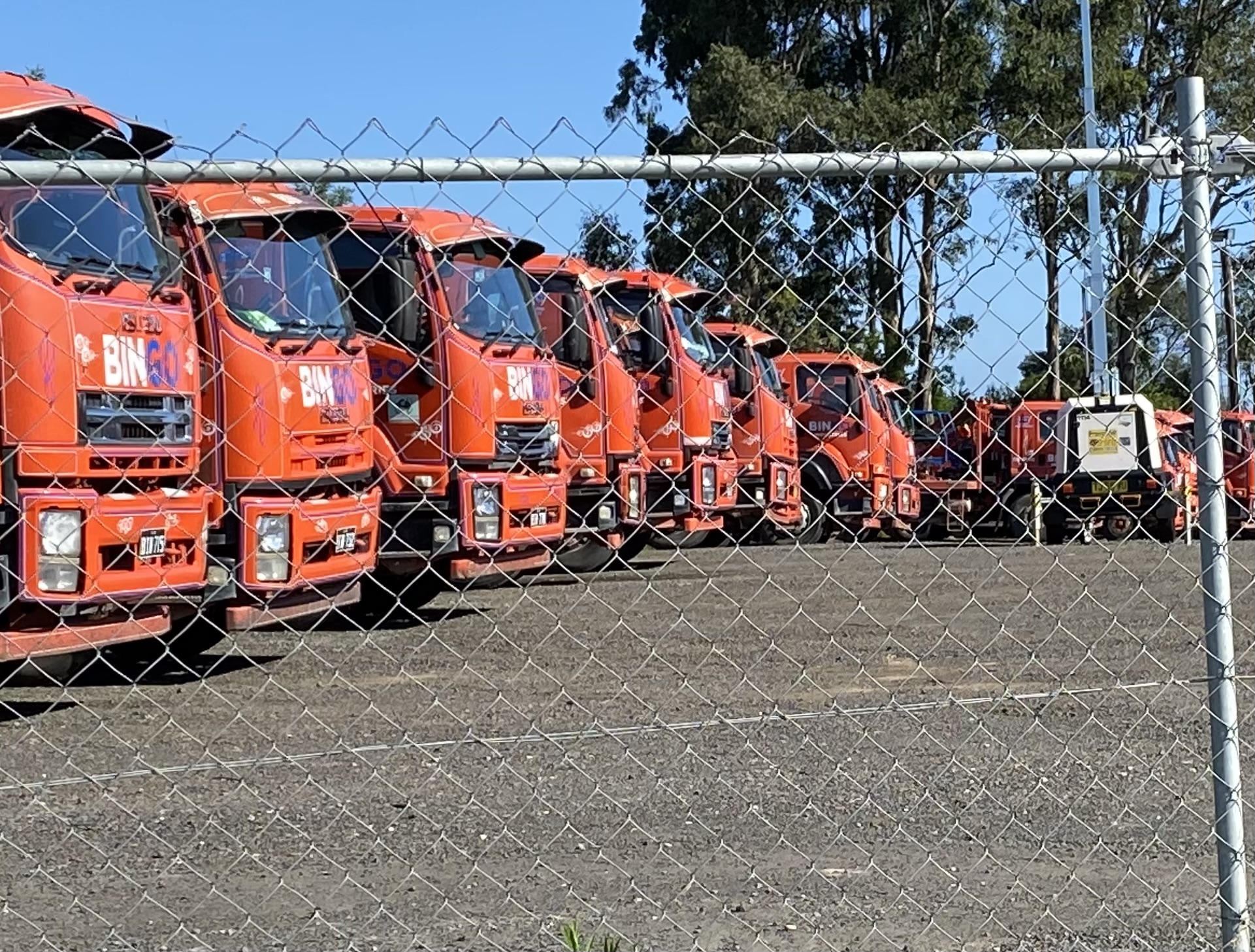